What is Evidence Based Medicine?

Evidence Based Medicine (EBM) has both a broad and a narrow definition. In 1996, Sackett provided the broad definition of EBM  where it was viewed as the intersect between 3 pillars: scientific evidence, clinical judgement and patient values & preferences.

Notably though, clinicians generally refer to EBM more narrowly as the production and interpretation of scientific evidence, i.e just 1 of Sackett’s 3 pillars.

The EBM 2.0 Project supports the ethos behind the broader more holistic definition and recognises the critical importance of integrating all 3 pillars in clinical practice. However the EBM 2.0 project has been named in keeping with the narrow definition that aligns with general clinician understanding of the term, since the EBM update that is sought specifically pertains to the scientific evidence, given this is the EBM pillar most in need of radical and urgent reform. 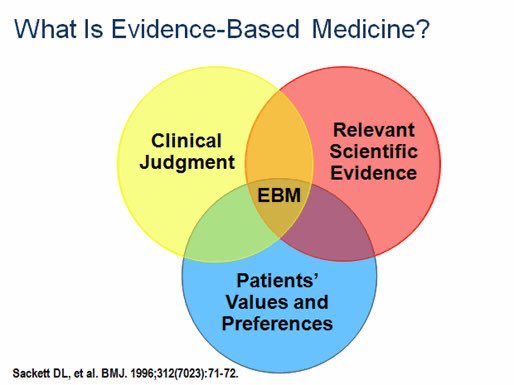